Be More Like Joseph – Listen, Obey and Be Silent

In the Christmas story, we are introduced to Joseph.

We learn of Christ’s earthly father in the Gospels of Matthew and Luke. While not much is known of him, we know that his unconditional love for a woman, and his obedience to the Lord, play an important role in God’s plan for redeeming His people from sin.

From the Beginning of Time, Joseph was Part of the Nativity

Tucked at the end of Matthew 1:16, we see this humble man first mentioned, “and Jacob the father of Joseph the husband of Mary, of whom Jesus was born.” Family lineage was a significant part of Jewish life. Hence, Matthew, writing to the Jews, established through the genealogy the importance of Joseph and his contribution to the upbringing of Jesus. More importantly, though, Matthew established that Jesus was the long-awaited Messiah, who the prophets wrote earnestly about.

While not much is known about Joseph, here is what we do know.

We know that he was a carpenter and pledged to marry a sweet young girl named Mary. And after finding out that she was with child, secretly planned to divorce her, so she would not bear the humility and disgrace others would bring upon her.

We know that he lived in Nazareth, but his family line was from Bethlehem – the same line that King David was from.

Through dreams, we know that angels brought Joseph messages from God stating not to be afraid; the Lord will guide and direct him.

We know that he obeyed those commands.

We know that he and Mary traveled to Bethlehem, where she gave birth to the Savior of the world.

We know that he was present at the temple eight days after the birth of Jesus. And twelve years later, he and his wife were frantically looking for their preteen son, who had wandered into the temple to teach.

Joseph’s story is told with great detail, but we see no words spoken from him.

As many times as I have read the Christmas story, not one time did I notice that Joseph didn’t speak a word.

Zechariah, Elizabeth, Gabriel, and Mary all spoke. Joseph did not.

It’s unclear why this was, but what is clear is that Joseph listened to the angels and did what they told him to do.

No questions asked.  No doubting.  Just obedience to the Lord. 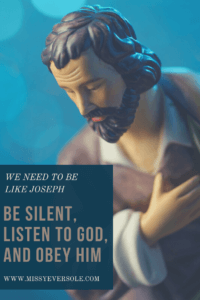 Joseph is the perfect example of someone who doesn’t question God’s instructions.

Unlike Zechariah, who questioned the angel Gabriel after receiving the foretold message that his wife would bear a child in her elderly age.

With Zechariah, Gabriel gave everything he needed to know about this soon-to-be son: his wife would bear a son, and he was to name him John. The birth would result in joy, happiness, and a lot of rejoicing from his parents and others. John would be great in the Lord, drink no wine, and would be filled with the Holy Spirit while still in his mother’s womb. He would make the people ready for Christ, Himself.

Gabriel gave all the information and more to Zechariah, and yet, Zechariah still questioned the archangel.

I believe because as Zechariah was trying to process everything, he wanted to make sure he heard the angel correctly. He wanted validation and reassurance.

Truth be told, I would have done the same thing.

How many times is the information straight up in front of me, and I still question God? The Lord could literally put a big, flashing neon sign in front of me, pointing me to the direction that I need to go, and I would still ask questions!

I am more Zechariah than I care to admit. But now, it’s time to be more of a Joseph.

I need to be silent, listen to God, and obey Him.

Do you feel the same way?

Slowing Down, Taking a Deep Breath, and Finding Rest this Christmas

As we continue through this Christmas season, let’s slow down and focus on Christ and the words of the Christmas story. Let’s not overlook the little things, and let’s look at the Gospels of Matthew and Luke in a new light. Let’s be like Joseph.

Be sure and check out these blog posts about the Christmas and Advent Season: