Stop Kicking Against the Goads

The term “kicking against the goads” isn’t one that we use in our everyday conversations, but it’s one that we should start using!

The account of Paul and his conversion in the book of Acts (9:1-19) is a favorite of mine. From the appearance of the risen Savior to Paul’s blindness for three days to Ananias laying his hands on Paul and healing him, Paul’s life from one of hatred to doing anything to further the kingdom is one that needs to be both studied and lived out.

In Acts 26:14, Luke provides additional insight into Paul’s encounter on the road to Damascus, “And when we had all fallen to the ground, I heard a voice saying to me in the Hebrew language, ‘Saul, Saul, why are you persecuting me? It is hard for you to kick against the goads.’”

Kicking Against the Goads

What exactly is a goad? And why does one kick against it?

The Holman Illustrated Bible Dictionary states that a goad is, “rod, generally eight feet long, with a pointed end used to control oxen. God warned Paul not to ‘kick against the goads’ by refusing to submit to the heavenly vision.” (emphasis added)

Refusing to submit to the commands of the Lord.

I’ve learned through the years that when that shove comes, I need to give in and do what He asks. However, it’s easier to write those words than actually to do to them.

I seek out other’s opinions and thoughts because I often doubt if I am hearing the Lord correctly. Do you feel the same way?

For example, I’ve been praying over a conference that I would love to attend; however, it’s the weekend before our oldest son leaves for his sophomore year of college. Hoping (and maybe praying) that both my husband and son would talk me out of going.

They didn’t. In fact, they encouraged me to go.

That’s not what I wanted to hear.

So, I turned to the director of the conference. Surely, she would say that since I was beginning my speaking ministry, this conference would be more beneficial to me in a few years.

Not only did she replied to my email, but we also spoke on the phone. While there are women established in their speaking ministries, the conference is one for all speaking levels.

Long story short, I am now registered for the conference. 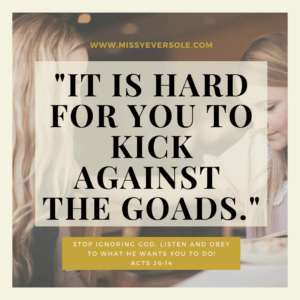 Why Do I Need Reassurance?

I wish I could pinpoint why I need reassurance from up to three people that I am indeed listening and obeying what the Lord is directing in my life. Maybe it’s because there have been so many times that I’ve acted on impulse and didn’t wait for the Lord’s directions.

Maybe it’s because of the fear of failure? What if I fall flat on my face? What if I embarrass myself? What if the voices of the past remind me that I am not good enough to achieve anything? All those questions are fed to me by the enemy. He is trying his best to bring fear and doubt into my life. He’s been doing this far too long, and it’s time to take a stand and proclaim, “Not today, Satan!”

Are you struggling with the Lord and kicking against the goads? Stand on the firm foundation of God’s Words and know that you are not only loved but that His Words are true. If you are gently shoved into something the Lord wants you to do, then I encourage you to pray and listen. We see only a fraction of what is going on in our lives. He sees the whole picture and is opening doors for us to advance His kingdom. Be courageous and step out in faith!

After all, the Lord shoves those He loves!

Be More Like Joseph – Listen, Obey and Be Silent

Five Ways to Quiet Your Heart

What Does It Mean to Kick Against the Goads?