Just Give Me Jesus!

The water was so warm and inviting and my heart was beating so fast from the excitement that was about to come. It was going to be one of the most memorable experiences of my life and one that would be questioned by my family, especially from my mother.

“You were baptized as an infant, why are you doing it again?” she expressed to me.

“That was your decision, Mom. This is mine, I want to publicly declare that Jesus is my Savior, that He died on the cross for my sins, He was buried, and on the third day He was resurrected and ascended into Heaven.” I replied.

Little did I know that this act of faith would drastically change my relationship with my mom – and not in a positive way.

I had been attending church with Craig since the beginning of our marriage. I was only going to make appearances as Craig’s wife and nothing more. My heart wasn’t at all into it, and I truly believed that Christians were “holier than thou,” snobby, and led a lifestyle that I certainly wasn’t going to adapt to live by. In my mind, I was a strong, independent woman and I didn’t need Jesus to get through life; I was doing fine on my own. Oh, how naïve I was!

One weekend in September 2001, my in-laws were hosting a church wiener cookout at their home. I begrudgingly went, knowing that I need to make an appearance since it was at my in-law’s house. Unbeknownst to me, that would be one of the most pivotal moments in my Christian walk.

The minister’s wife and now a dear friend approach me with the invitation to attend a “Women of Faith” conference in Indianapolis. I was living in that city at the time I met Craig, and she thought that since I knew the area, I would be able to help everyone navigate around it. Looking back, the Lord was using Karen and Indianapolis as a path to lead me to salvation.

I knew from the moment that she asked me about going, I wasn’t going to. There was no way that I would 1) go to a “holier than thou” conference, 2) spend three hours to and from Indy in a van full of ladies that I did not know and 3) I was almost four months pregnant with Grant and was tired all the time.

A few days later, Karen called and I let it go straight to the answering machine. I knew she wanted an answer about attending the conference, and I knew that answer was going to be a resounding no.

“You need to go to that conference,” Craig said.

“I’m not going to conference,” I replied.

“No, you don’t understand what I am saying: you are going to that conference.”

That was the first (and last!) time that Craig ever told me told me to do something that I didn’t want to do!

Insisting and telling me that I was going was one of the best things that he could have ever done for me.

I Surrender All to Jesus!

During the conference I surrendered myself to the Lord, I became a believer, and I confessed that I was a sinner. I made life-long friends and bought my first Bible. During the praise song, “Shout to the Lord,” I felt a fluttering in my stomach; it was Grant. That was the first time that I felt that sweet little child inside of me. I will cherish those memories forever.

Upon returning from the conference, we immersed ourselves in church and Sunday school. I read the Bible, joined in my first Beth Moore study, and life was going well. Isn’t that how the Christian life is supposed to go? Free and easy?

It turns out when you declare your faith in Jesus; the enemy is on the prowl, big time. 1 Peter 5:8 clearly states, “Be sober-minded; be watchful. Your adversary, the devil, prowls like a roaring lion, seeking someone to devour.”

The time between Women of Faith and my baptism was a time of pain and sorrow. My mom had a complicated double-knee surgery, both my grandmother and stepson passed away, and I was hospitalized twice for pre-term labor. My faith in Christ is what got me through it all.

Immersed in Water and Living for the Lord

On February 9, 2002, at the age of 29 and eight months pregnant with Grant, I was baptized. I will never forget that feeling of publicly declaring that I am a believer in Christ. My life was changed forever that day.

What about you? Have you publicly declared that Jesus is your Savior by being immersed in water? It doesn’t matter if you are in your teens or 80’s, Jesus is waiting with His arms wide open and ready to welcome you into the family!

I can relate to you if you have a family member that doesn’t understand why you were baptized. I have absolutely no regrets of my decision, but it did start the process of a strained relationship with my mother. Looking back, I wished that I could have sat down with her and calmly told her how much joy that this brought me. I would give her a better understanding that this was a personal decision and not one that I was doing to spite her.

A day before she passed away, with Craig and me by her bedside, I asked her if she had accepted Jesus as her Savior. I asked her to accept Him into her heart, and confess that she was a sinner. Her response was, “yes” to all three questions. She has been with the Lord for almost ten years now, and I pray that she sees the glory of eternal life, and she knows why I made that decision nearly 17 years ago. 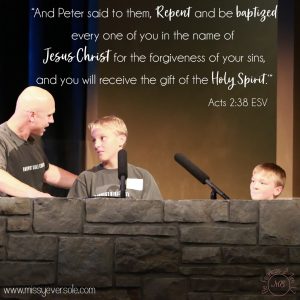 While I didn’t have a photo of myself being baptized, I do have Grant and Connor’s photo! What a glorious day!