Happy 4th of July! A Day of Celebration and Prayer

It’s 4th of July, Independence Day, for us here living in the USA.

There will be American flags waving high and get-togethers with family and friends. Throughout the day, there will be hamburgers and hotdogs consumed, lots of laughter and games, and fireworks, fireworks, and even more fireworks!

I’m an American history buff. Early American history intrigues me; the Founding Fathers, the Revolutionary War, Washington, Jefferson, Franklin and Hamilton (and yes, I am a massive fan of the Broadway musical!)

Not only is July 4th the day that the Second Continental Congress approved the final draft for America’s independence from Great Britain, but approximately 50 years to the day both John Adams and Thomas Jefferson passed away within hours of each other! How fascinating!

The United States of America

Our country has come a long way since those colonial times. What started as just 13 colonies is now a powerhouse nation comprised of 50 states. Patriotism still reigns in the heart of Americans. Sure, we have a few citizens that tend to be disrespectful and try and cause a ruckus, but the majority still stand for our flag! 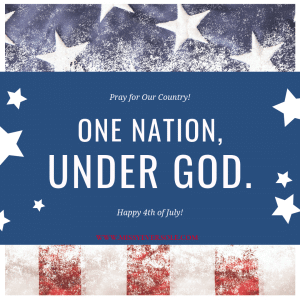 Pray for Our Country!

As you celebrate our freedom today, take a few moments to pray for our country!

Our country has fought long and hard for freedom, and it’s not something to take for granted!