“He Shall Be Called John.” – Elizabeth, Mother of John the Baptist

“Wow! That’s the first time he’s done that!” she thought to herself as she looked down at her round stomach in amazement.

Yes, she had felt little flutters here and there, but nothing like this. It felt as if her son were leaping for joy in her womb. This joyful moment occurred as soon as she had greeted her cousin, Mary.

It was as if the unborn child was celebrating the arrival of someone special.

Perhaps it was a King?

Or maybe it was a Savior?

Or maybe it was someone who stepped off His heavenly throne to give His people eternal life.

The Temple, the Priest, the Angel, and the Promise

The last five months had been surreal for Zechariah and Elizabeth.  They were a couple righteous before the Lord, walking blamelessly in all His commands and statutes (Luke 1:6). However, they lacked the one thing that both of them desired: a child. Despite this, they continued to serve the Lord with gratitude and thankfulness.

Zechariah was a priest and served in the Temple. A once in a lifetime opportunity for Elizabeth’s husband, he was chosen by lot to enter the temple of the Lord and burn incense. While people were outside praying for the nation, Zechariah was doing his job with the utmost servitude.

Focused on the task at hand, Zechariah was stunned when he saw an angel of the Lord appear out of nowhere. Stunned is putting it mildly; however; the Bible describes him as full of fear. And rightfully so; can you imagine just going about your business when suddenly an angel appears in front of you?

Gabriel was sent from the Lord Himself to deliver the news to Zechariah,

“Do not be afraid, Zechariah, for your prayer has been heard, and your wife Elizabeth will bear you a son, and you shall call his name John. And you will have joy and gladness, and many will rejoice at his birth,  for he will be great before the Lord. And he must not drink wine or strong drink, and he will be filled with the Holy Spirit, even from his mother’s womb.  And he will turn many of the children of Israel to the Lord their God, and he will go before him in the spirit and power of Elijah, to turn the hearts of the fathers to the children, and the disobedient to the wisdom of the just, to make ready for the Lord a people prepared.” Luke 1:13-16

In shock, Zechariah asked a straightforward question that would render him silent until after his son was born, “How shall I know this? For I am an old man, and my wife is advanced in years.”

You almost have to feel sorry for Zechariah at this moment. Did he speak without thinking, like we tend to do so frequently? Scripture clearly says he was righteous before the Lord, so he believed in the Lord and all His ways; he believed that the Lord would answer prayers. So, I do believe that in Zechariah’s human frailness, he spoke before thinking. 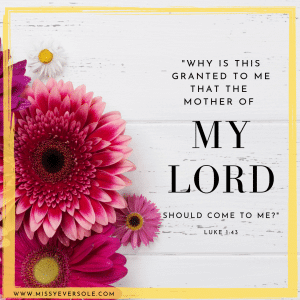 Elizabeth, the Mother of John the Baptist

The words that Gabriel spoke did indeed come true. For five months, Elizabeth kept herself in seclusion. While it isn’t clear as to why she did this, she used that time to worship the Lord and prepare for the arrival of John.

During that time, Gabriel visited her cousin, Mary, and thus set the plan of eternal life and salvation in motion. The Savior was coming in the form of man, born as an infant, the Savior of the world.

It was Gabriel who told Mary that her cousin had conceived a son in her old age and was in her sixth month of pregnancy, proclaiming “For nothing will be impossible with God.” Luke 1:37.

With haste, Mary traveled to see her cousin, setting off a chain of emotions and excitement from Elizabeth’s womb.

Filled with the Holy Spirit

When Mary entered Elizabeth’s house and greeted her, Elizabeth’s son, John, leaped in her womb at the sound of Mary’s voice. The child, not even born yet, was honoring Jesus.

Can you imagine what a sight that would have been? In today’s society where abortion is legal up to the moment of birth, this soon-to-be-born infant was filled with the Holy Spirit, leaping for joy in his mother’s womb because the Messiah was in his presence!

In awe over this feeling, Elizabeth exclaimed,

“Blessed are you among women, and blessed is the fruit of your womb! And why is this granted to me that the mother of my Lord should come to me? For behold, when the sound of your greeting came to my ears, the baby in my womb leaped for joy. And blessed is she who believed that there would be a fulfillment of what was spoken to her from the Lord.” Luke 1:42-45

Mary stayed with Elizabeth for about three months after this, then returned home.

The Birth of John the Baptist

Elizabeth bore a son, just as Gabriel said would happen. On the eighth day, it was time to circumcise the infant, and Zechariah was still unable to speak. With her neighbors and relatives gathered around, and the silent father, they insisted on naming the baby after Zechariah.

In a time and culture when women didn’t speak or put their foot down, Elizabeth did just that.

“No, he shall be called John.”

With protests from the family, the silence was lifted from Zechariah, and he spoke, blessing God for this miracle.

John grew up “strong in spirit,” and lived in the wildness until the time of his appearance to the public, preparing the way for Jesus, fulfilling prophecy and the words that the angel, Gabriel spoke.

The Gospel of Luke is the only book of the Bible that has an account of Zechariah and Elizabeth’s story. It’s an account full of hope, answered prayers, and the promises of the Lord fulfilled.

***My monthly series, Women of the Bible, returns today. On the third Tuesday of the month, I will feature a woman in Scripture who found her strength in the Lord when faced with adversity or circumstances beyond her control.*