That last line in the first chorus gets me every time I hear it.

“This child that you’ve delivered will soon deliver you.”

Jesus, the Son of God, delivered His people from not only the sins of the world but also His own mother.

What a profound statement!

Isaiah 7:14 – Prophecy of the Coming of the Messiah 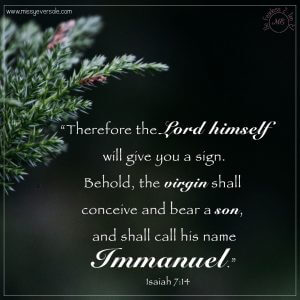 Over 700 years before the birth of our Savior, the prophet Isaiah was speaking with King Ahaz, the king of Judah, during a time of upheaval between his country and Israel. Israel was planning on coordinating with Syria to invade Judah. Needless to say, King Ahaz was on edge. The Lord spoke to Isaiah and assured both Isaiah and the king that the Lord, himself would give the people a sign.

The sign would be born of the (not a) virgin. The Hebrew word for virgin is ‘almâh, which means “unmarried woman of marriageable age.” The son was to be named Immanuel, “God with us.”

The Israelites went through traumatic, trying times in those 700 years, just waiting for their Savior to be born.

The One who is the King of Kings and Lord of Lords.

The One who is Savior to all.

The One who died on the cross for our sins.

Isaiah’s prophesy came true in a dream that Joseph had. Mary was engaged to Joseph who, upon finding out that she was pregnant with a child from the Holy Spirit, reacted accordingly.

Can you imagine that conversation between Mary and Joseph? In a time when stoning a woman for getting pregnant out of wedlock was acceptable, Joseph had compassion for Mary and was unwilling to put her to shame. He was going to divorce her quietly.

That is until he had that life-changing dream…

“But as he considered these things, behold, an angel of the Lord appeared to him in a dream, saying, “Joseph, son of David, do not fear to take Mary as your wife, for that which is conceived in her is from the Holy Spirit.  She will bear a son, and you shall call his name Jesus, for he will save his people from their sins.” All this took place to fulfill what the Lord had spoken by the prophet:

“Behold, the virgin shall conceive and bear a son,
and they shall call his name Immanuel.”

(which means, God with us). When Joseph woke from sleep, he did as the angel of the Lord commanded him: he took his wife, but knew her not until she had given birth to a son. And he called his name Jesus.”

And right there, tucked into the dream were Isaiah’s words coming to fruition.

The angel, Gabriel, announced to the young Mary that she was the virgin who would give birth to a son. God’s Son and our Savior.

In the sixth month the angel Gabriel was sent from God to a city of Galilee named Nazareth, to a virgin betrothed to a man whose name was Joseph, of the house of David. And the virgin’s name was Mary. And he came to her and said, “Greetings, O favored one, the Lord is with you!”  But she was greatly troubled at the saying, and tried to discern what sort of greeting this might be. And the angel said to her, “Do not be afraid, Mary, for you have found favor with God.  And behold, you will conceive in your womb and bear a son, and you shall call his name Jesus.  He will be great and will be called the Son of the Most High. And the Lord God will give to him the throne of his father David,  and he will reign over the house of Jacob forever, and of his kingdom there will be no end.”

And Mary said to the angel, “How will this be, since I am a virgin?”

And the angel answered her, “The Holy Spirit will come upon you, and the power of the Most High will overshadow you; therefore the child to be born will be called holy—the Son of God.  And behold, your relative Elizabeth in her old age has also conceived a son, and this is the sixth month with her who was called barren. For nothing will be impossible with God.” And Mary said, “Behold, I am the servant of the Lord; let it be to me according to your word.” And the angel departed from her.

Can you imagine what was going through Mary’s mind? How was she going to explain this to her family, to Joseph? Who would believe her? I am sure that she knew of the prophecy that Isaiah had proclaimed years before. I can imagine that she felt not only a little scared but also delighted that she had found favor in the Lord.

So, Mary Did You Know?

I believe that she did. She knew God’s Word. She knew that a Savior was coming to save us all. She knew that her child was the Son of God. She was the first to hold the infant Christ and one of the last people to see Him die on the cross. From the moment Gabriel spoke to her, her world was changed,  forever blessed by the Father, Himself.

Here is my favorite version of “Mary, Did You Know.” Listen carefully to the words, and may the peace of the Lord be with you all during this Christmas season!