“If she is really your friend, why is she talking about you behind your back, mom?” my young son asked as he was working on homework at the kitchen table.

His question caught me off guard. First of all, I had no idea that he was listening to the conversation between my husband and me, and second of all, his question had a lot of truth to it.

If she really was my friend, why was she saying things about me behind my back?

That question still haunts me to this day.

Why Christians Get a Bad Rap

Listen, friends, we live in a society where it’s easy to express our feelings and comments through our fingers.

If a person doesn’t like someone’s opinion on the color of orange, they will fire off a comment to let them know that they are wrong simply because the commenter believes that blue is a better color than orange.

Or maybe someone posts something in support a particular politician and get called vile names in the comments. And that person commenting on the post? Their Facebook page has numerous Bible verse posts.

While many people tend to hide behind their keyboards, there are still some people who like to do it the old- fashioned way and speak ill of others.

That friend who was talking behind my back? She was heavily involved with our church and was considered to be a mentor to others.

No wonder why nonbelievers tend to look down on Christians, we can be hypocrites! We talk to the talk, but yes, at times, don’t walk the walk! 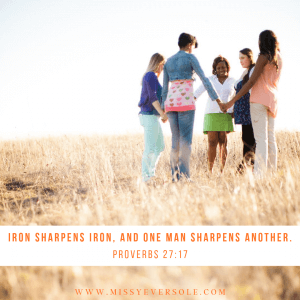 Most Believers can quote this famous Bible verse but do they apply it in their daily lives?

In Biblical times, iron was used to sharpen other iron instruments, making them more useful and practical. The same goes for friends. Encouraging words and constructive criticism can make people more efficient.

Yes, it’s easy to get caught up in gossip and talk behind peoples backs.

We are humans. We are sinners. We like to voice our opinions.

But when we are voicing our opinions, and we feel the Holy Spirit prompting us to stop; do we really stop talking? Or do we continue with the conversation only to later feel guilty of what we said?

I’ve done both, with the latter ruling the majority of the time.

When I feel the prompting of the Holy Spirit, I know that I have gone too far in my conversation, and it’s time for me to stop talking. That’s usually when I change the subject and move on.

However, for those times that I have ignored that prompting, and continued on gossiping, I always feel convicted. I pray and ask for forgiveness. If needed, I will call or text the person and apologize for the words that I have said.

But what do you do when you are the subject of negative talk? In the case of my friend, we talked it out, and I forgave her for her words, but our relationship has not been the same. We still chat now and then, but I always will have my guard up around her.

Friends, it’s time to start living out the words of Proverbs 27:17. It’s time to build each other up and if we have a conflict with someone (and we will!) let’s do our best to work it out with that person.

Imagine how uplifting our country would be if we used words of encouragement instead of bringing others down with our negative words.

I am so thankful for you, my faithful blog readers, and friends! I am praying for you this week!