In last Friday’s blog post, I wrote about our youngest son, Connor, and the surgery he had two years ago.

While it was one of the most challenging experiences that our family has gone through, it was also one where we saw the healing hand of the Lord in every aspect of the journey.

Pectus excavatum is a hereditary condition that creates a deep indent or funnel in the chest wall. Both my husband and older son have a slight indent, but Connor was born with a severe case of it.

I noticed it right away shortly after his birth.

“What’s wrong with his chest?” I asked the pediatrician with concern.

“He’s got a concave chest. No need to worry about it until he gets into his teenage years” was her reply.

I was handed information about it, and that was the end of the discussion for a while.

Life was normal for Connor. He was able to play soccer and basketball without any trouble at all. Our pediatrician suggested that we see a pediatric surgeon to get established with him, in case Connor might need surgery to repair the condition.

Thankfully, we live close to one of the best children’s hospitals around, and the two leading surgeons are familiar with this condition and have performed many Nuss procedures over the years.

The Nuss procedure is a surgery where the doctor inserts a curved metal bar through a small incision to push out the sternum and ribs to reshape them. Supported by a stabilizer, the bar remains in the patient for 3-4 years.

During that first meeting, we were told that nothing had to be done at the point in time, that Connor’s condition was minimal, to keep monitoring the situation, and if he had any issues at all, to give them a call.

Afterward, Connor continued to be the typical middle-school boy, playing sports, hanging out with friends, and eating everything in the house!

That all changed in the blink of an eye. 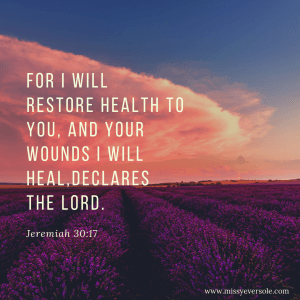 In late January 2017, during a challenging basketball game, we noticed that Connor’s breathing was unusually heavy – sometimes it looked like he was even gasping for air.

I remember clinging to my husband and crying out, “He can’t breathe!” My mom instinct kicked in, and I wanted to go out and grab him off the court, but the Lord stepped in and calmed my heart.

Our athletic son, who could run up and down the court with no issues at all, could now only go back and forth a few times and then would be forced to sit down and to catch his breath.

Upon seeing the surgeon again, it was determined that due to Connor’s rapid growth spurt, his chest was now pressing down on his heart and lungs. His indent went from a minimal size to severe in a matter of 13 months.

The Power of Prayer 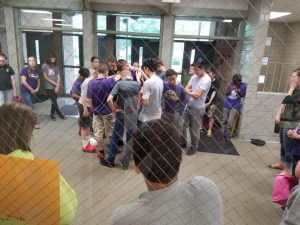 Connor’s 7th-grade class, praying over him.

What happened from the moment the surgery was scheduled to August 1st, 2017 was all God. Seeing His healing hand in all this still brings tears to my eyes.

Our son was cleared to resume normal activities on July 31st, and on August 1st, he was the goalie at soccer practice.

Yes, our Lord is the Great Physician!

That summer, two years ago was one of the most challenging times as a family. While we were prepared for the physical limitations that Connor would have during his recovery, the psychological side threw us for a loop. Our 13-year-old active, athletic son had to be inactive for eight weeks. His mood remained morose for most of the time, but with the Lord’s help, we made it through that tough season! 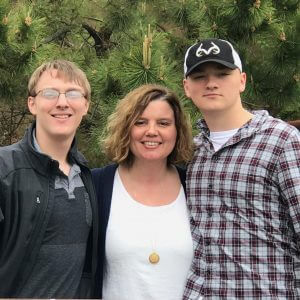 I would love to hear how you have seen the healing hand of the Lord in your life! Please email or comment below to let me know.

Have a blessed day!