A Love So Strong and Deep

*My monthly series, Women of the Bible, returns today. On the third Tuesday of every month, I will feature a woman in Scripture who found her strength in the Lord when faced with adversity or circumstances beyond her control.*

She stood there in disbelief, tears streaming down her face, her body going numb, and her heart crushed beyond repair. How was she ever going to get over this pain? How was she going to go on with her life? In a moment of human frailness, she may have even questioned God, “Why are you letting this happen, Lord?” As quickly as she may have thought that, she knew that this was the Lord’s plan all along. She understood and believed the scriptures, and she knew that her son, who was nailed up on that cross, was not just her son but the Son, the Son of the Father, the Savior, and the One who would pay the price for our sins.

She was the only one to witness both His birth and His death.

She’s Mary, the Mother of Jesus.

Mary’s story began when the angel Gabriel appeared to her, announcing that she was the one that the Lord had chosen to give birth to our Savior. A devoted mom, she followed the traditional customs of the day and took Jesus, along with Joseph, to the temple to present Jesus to the Lord (Luke 2:22-38). She was present when the Wise Men came bearing gifts (Mathew 2:10-11) and she had a moment of panic when she couldn’t find Jesus after attending the Feast of the Passover (Luke 2:41-52). She was there at the beginning of her son’s ministry, asking Him to turn water into wine at a wedding (John 2:1-11). On that occasion, I think that she was ready to let the world know how special her son was!

Mary saw her oldest son (Jesus had at least four brothers and a couple sisters – the exact number and names are unknown) ridiculed, persecuted, spat on, beat beyond recognition, mocked and die in one of the most humiliating, painful ways imaginable.

Nailed to the cross, Jesus looked down upon Mary with compassion. One of His final actions was to make sure His mother would be taken care of. He instructed John to take care of her (John 19:26-27). Jesus then spoke His final words, “It’s is finished.”

Mary saw her son take his first breath and his last.

And while the Bible doesn’t explicitly state that Mary saw Jesus after His resurrection and ascension, she was with the other disciples and her sons, as they waited for the Holy Spirit to come (Acts 1:14). She would have had to know that her Son resurrected from the dead.

“But the Greatest of These is Love” 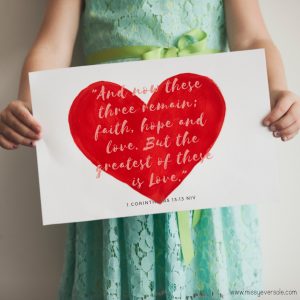 It’s no secret that the love of a mother for her child is ceaseless and strong. From the moment we lay our eyes on our child, the bond we have is unbreakable.

We’ve celebrated their victories, whether it’s been that first night of successful sleep, tieing shoes on their own, cheering them on at athletic events, getting their drivers license, or graduating high school.

But through it all, we LOVE our children, no matter what!

Jesus loves us no matter what. Through all the mess ups and sins, He’s right there waiting for us with open arms, ready to embrace us, just like we are with our children – no matter what age they are.

1 Corinthians 13:13 states, “And now these three remain: faith, hope and love. But the greatest of these is love.”

Nothing is more significant than love.

God’s love for us.

Our love for our children.

Our love for others.

Yes, the enemy will try his best to break any love or bond that we have with our children (especially when they are older), but one thing remains true – nothing can stop a mother from loving her child unconditionally.