She had gotten up early that Sunday morning. Her heart was heavy, and her sorrow was profound. Her Rabonni (teacher) was dead. He suffered the most extreme execution known at the time. She was part of the small group of followers that stayed with Him through it all. His disciples, except John, had abandoned Him.

She was at the foot of the cross when He took His last breath.

She was there when Joseph took His body down from the cross.

She was there when Nicodemus applied the perfumed ointment and wrapped His body in sheets of linen cloth.

She was there when they placed His body into a tomb and rolled the stone in front of the opening.

She went home to prepare more spices for His body but had to wait until the Sabbath was over to go back to the tomb. By law, they were required to rest on the Sabbath.

The Sabbath was now over, and she headed out at dawn to the tomb.

Nothing could have prepared her for what she was about to see.

Little is known about Mary Magdalene. However, in Luke 8:1-3, we get a glimpse of who she was;

“Soon afterward he went on through cities and villages, proclaiming and bringing the good news of the kingdom of God. And the twelve were with him, 2 and also some women who had been healed of evil spirits and infirmities: Mary, called Magdalene, from whom seven demons had gone out, 3 and Joanna, the wife of Chuza, Herod’s household manager, and Susanna, and many others, who provided for them out of their means.“

In a time and culture when women were looked down upon, Jesus included them in His ministry.

Scripture is clear that these women provided for Jesus and His disciples with their own money. 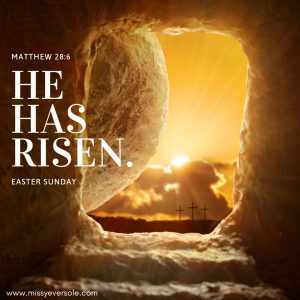 As Mary Magdalene and the other women got to the tomb, they were in disbelief. The tomb was empty, and there was an angel who spoke to them.

5 But the angel said to the women, “Do not be afraid, for I know that you seek Jesus who was crucified. 6 He is not here, for he has risen, as he said. Come, see the place where he lay. 7 Then go quickly and tell his disciples that he has risen from the dead, and behold, he is going before you to Galilee; there you will see him. See, I have told you.” 8 So they departed quickly from the tomb with fear and great joy, and ran to tell his disciples.

The angel gave Mary a confirmation, a command and a “check it out.”

** At our church, whenever we see “behold,” it means, “check it out and pay attention to this!”

As directed by the angel, Mary, and the other women, ran as quickly as they could to the other disciples; only be to be met with disbelief.

Intrigued, Peter and John decided to see for themselves what was going on at the tomb.

When they got there, they were amazed and in utter disbelief. It was empty.

While Peter and John were searching for answers within the tomb, something astonishing happened outside the tomb as John 20:11-18 reads:

11 But Mary stood weeping outside the tomb, and as she wept she stooped to look into the tomb. 12 And she saw two angels in white, sitting where the body of Jesus had lain, one at the head and one at the feet. 13 They said to her, “Woman, why are you weeping?” She said to them, “They have taken away my Lord, and I do not know where they have laid him.” 14 Having said this, she turned around and saw Jesus standing, but she did not know that it was Jesus. 15 Jesus said to her, “Woman, why are you weeping? Whom are you seeking?” Supposing him to be the gardener, she said to him, “Sir, if you have carried him away, tell me where you have laid him, and I will take him away.”16 Jesus said to her, “Mary.” She turned and said to him in Aramaic, “Rabboni!” (which means Teacher).17 Jesus said to her, “Do not cling to me, for I have not yet ascended to the Father; but go to my brothers and say to them, ‘I am ascending to my Father and your Father, to my God and your God.’”18 Mary Magdalene went and announced to the disciples, “I have seen the Lord”—and that he had said these things to her.

This is what our Christian belief is all about! Christ said He would die and on the third day, He would be raised from the dead.

Jesus is who He says He is!

He is the Messiah, the Savior, Redeemer and the Way, the Truth and the Life!

Oh, sweet friends, if you haven’t placed your faith in Christ, now is the time! It’s NEVER too late to become a believer! You may have every excuse in the book as to why you can’t, but Your past is in the past!

Accepting Christ as your Savior is as simple as A,B,C:

It’s that easy, friends! Jesus loves you so much that He died for you! He wants you to have eternal life with Him. Run to Him; He is waiting!