Anxiety Got the Best of Me!

Last week, the deer hunting in Illinois officially began. Half of our household headed two hours south to the family farm to try their luck at filling our freezer with meat.

This particular morning, I hadn’t heard from him, so around 9:00, I texted him and Connor to see how it was going.

After 45 minutes of not hearing anything, I called both phones.

The call went straight to voice-mail.

And I began to panic.

“Were they tracking it?”

“Did they fall out of the tree stand?”

“Were they overcome with fumes from the heater?

I was now in full panic mode. Pacing back and forth, praying, and the tears were flowing, I tried calling again.

Finally, my husband, who had been completely clueless of what my mind was conjuring up about their demise, answered.

You would have thought I would be relieved to hear his voice, right?

Nope, I was mad! And I stayed mad for almost 24 hours.

It turns out they put their phones in their bags and silenced them; which makes sense because they were trying to be quiet after all!

Anxiety Got the Best of Me! 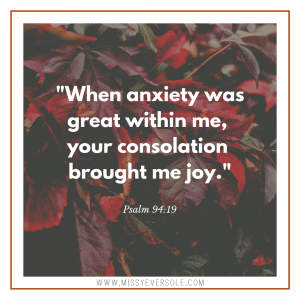 When in full panic mode, a person’s mind can dig up the worst-case scenario. In this particular case, I had thought they were overcome by the fumes of the heater in the hunting stand. That obviously didn’t happen! In fact, they were in their tree stands in another part of the woods.

I learned a great lesson that day: do not think the worse! It will cause you to have a panic attack! The Lord is in control; rely on, and remember that before overthinking a situation!